Update November 2015: A few more updates while waiting for the snow to fall. Make sure to check out the Pictures Section. You'll see more like the one below, courtesy of Ian Corbett. Thanks Ian!

Update September 2015: There are some new photos from the Boonville 2015 Show in the Pictures Section. Take a look at the photo below, pretty incredible!

Update August 2015: Something very exciting for anyone with an old Sno-Jet. There is now a site dedicated to reproduction parts. There are a few different pieces available, and more will be available in the future. Go directly to http://www.snojetshop.com/ and take a look. I've personally ordered an Ultimate Sno-Jet Suspension Kit and am incredibly happy with what I received. The quality of the parts is great, everything is newly manufactured. When you get the kit, all you need to do is install the pieces, no paint or anything required. These parts are normally very tough to find, its great that they're available again. Take a look below at the one suspension kit available. Update March 2015: I am very pleased to announce the book True Blue: Remembering Jim Adema by Tom VanDyken.
Here is a peek at the cover of the book. Click HERE for more information, or go directly to http://snojet.com/trueblue/. Update March 2015: I've got a big surprise coming, more information coming soon. For now, enjoy some new photos in the Pictures section, including this photo taken back in 1972. Update November 2014: It's been a very hectic year. Lots of new stuff coming to the site. More Viewers Sleds on the way, as well as a few new projects of my own coming soon. Stay tuned. For now enjoy Richard Kepler's line-up of Sno-Jets. Update January 2014: There is an incredible story to go along with the Thunder Jet pictured below.
Go to the Viewers Sleds Section to get all the details, enjoy! Update December 2013: I'm really happy to share the photo below with everyone. On the left you'll see Cedric Fradette (Blueman Jr), and on the right, his dad, Yves Fradette (Blueman). After everything that has happened, Cedric is keeping the passion alive. He's put in countless hours into his dad's SST. I know Yves would be very proud, excellent work Cedric!
You can see more of his sleds in the Viewers Sleds Section. Merry Christmas and Happy Sledding!

Update December 2013: I've been adding pictures from all the different Sno-Jet Brochures in my collection. You can see some of them in the Pictures Section.
As always there's several new sleds and collections in the Viewers Sleds Section.
The photo below was taken at a show in Wiliamson, NY Sept 2013, courtesty of David's Vintage Snowmobile Page. 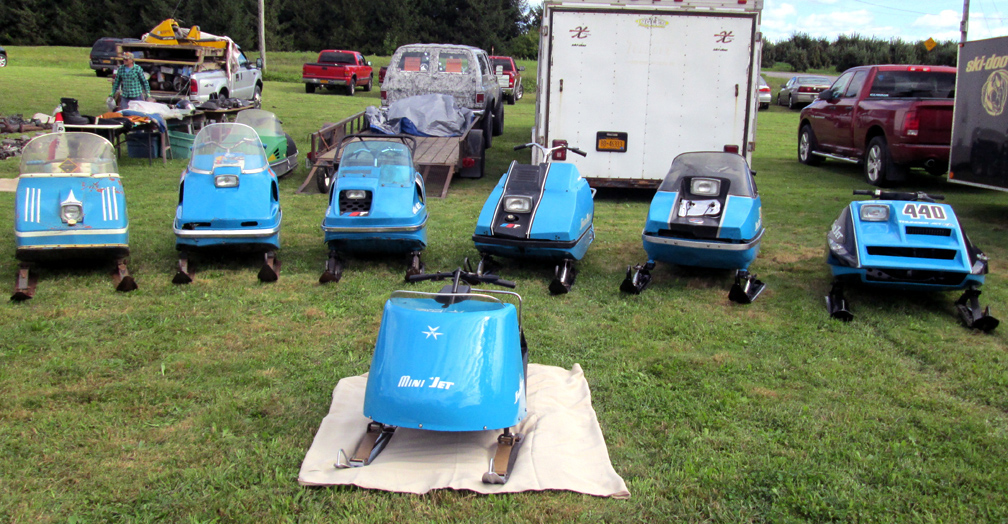 Update July 2013: Sorry its been a while since my last update. I've gone ahead and updated all my personal project, and listed some of the new Sno-Jet I've picked up.
You can see them in the Restorations Section. Here's a shot of a few of my sleds from a sledding trip over the winter. You can see some more pictures from that trip in the Pictures Section. Update April 2013: More additions to the Viewers Sleds Section. I've got a few more updates with my own projects coming very soon, so check back.
Here we have a restored 69 and a 71, courtesy of Jeff Theisen. Update February 2013: As always there are more additions to the Viewers Sleds Section. Along with a few other little things you'll have to search around to find. Keep an eye out as well, I'll be adding the 2013 Earl Grey Vintage Drags/Ovals pictures shortly. As for this cool shot below, its courtesy of Dean Schrader. Update December 2012: Introducing the Thunder Jet Registry! I've been wanting to put this together for quite some time, and am happy to say its up and running. Click here to check it out.

Update September 2012: Some sad news this month. One of our fellow Sno*Jet fans has passed away. Yves Fradette (Blueman) and his wife just recently passed away. Yves was heavily involved with everything to do with Sno*Jets, riding, collecting, restoring, and especially helping out others. I know he personally helped me out a few different occasions. The world of Sno*Jet has taken a huge loss. Here's a photo of Yves, and you can find more under the Viewers Sleds Section. 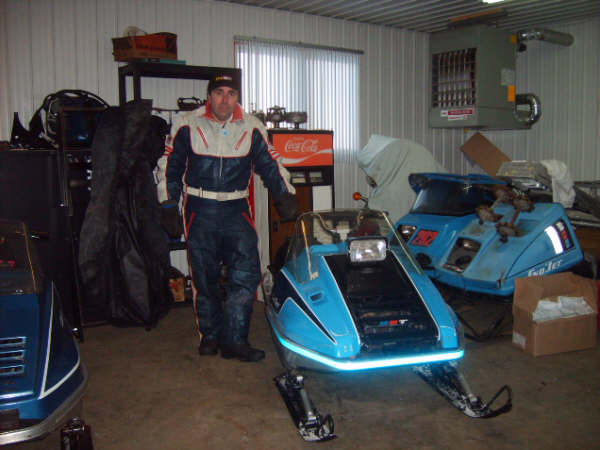 Update June 2012: Not a lot new to report, I've got a new project you can check out in the restorations section. I also had a couple sleds out earlier in the year for a quick photoshoot. I'll add the rest of the photos soon, but here's a shot to hold you over for now! Update April 2012: There is a lot of new information in the R&D, Racing & Rare Sleds Section, including the whole story on the sled below, Sno-Jets last prototype!
Special thanks to Kemper Freeman for all his contributions! 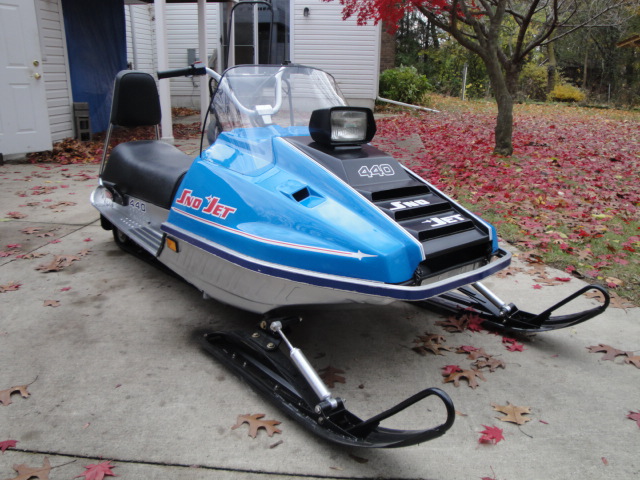 Update February 2012: The Earl Grey Vintage Drags, it was a great turn-out! Although pretty warm for the F/A engines, I guess we were lucky enough to even have snow. You can see some pictures from the races here. Below is a shot of my 650 during my first test run of the year. It really caught me off guard, and was probably a combination of things. I managed to hang out, and kept the skis on the ground the rest of the day.
Special thanks to Andrew Binnie for snapping the pic!
Update January 2012: Happy New Year! I've been busy trying to get my Thunder Jet ready to race, and as always, trying to keep on top of the website updates.
I've added some new information to the Tips Section as well there are more additions to the Viewers Sleds Section, including this completley original GT2! Update November 2011: More additions to the Viewers Sleds Section, including these two Thunder Jets out of Sweden! Update October 2011: Sorry I haven't had many recent updates. I've been busy, moved into a new house and am still trying to get the garage all setup.
For now there are a few more additions to the Viewers Sleds Section. More to come soon though... Update June 1 2011: A few additions including some photos of the Hart Bros Racing! Update April 27 2011: I'm very pleased to announce the 650 Sabre Jet Registry! 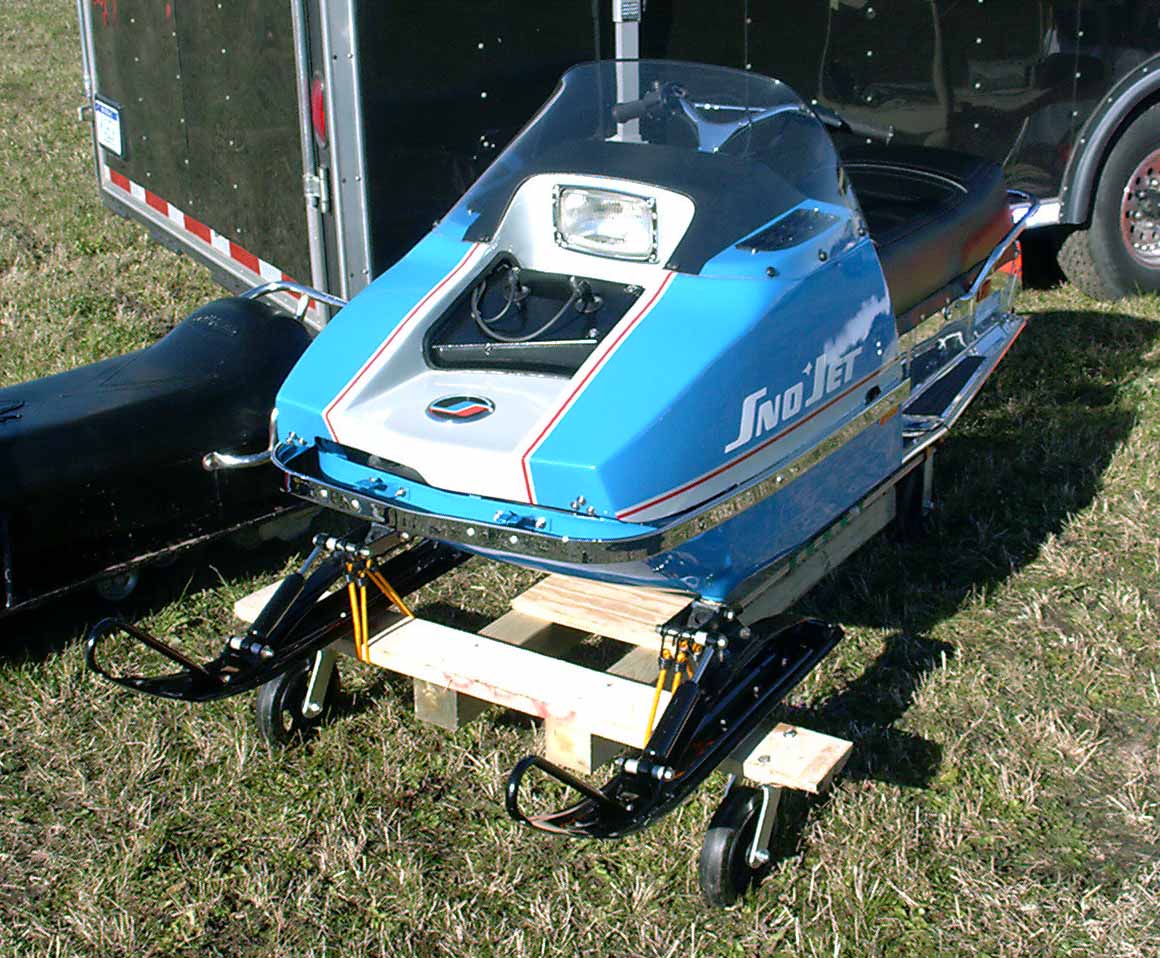 Update April 2011: I've added a bunch of photos from the Earl Grey and Moose Jaw Vintage Drags this past February, you can see them in the Photos Section. A few more additions in the Viewers Sleds Section.

Update March 2011: I've been fine tuning the site, fixing broken links, and adding to the photos section. As always, updating the Viewers Sleds Section, take a look at this sled...

Update February 2011: I'll have some photos from the Moose Jaw Vintage Drags up soon, but for now I've added a few more sleds to the Viewers Sleds Section, as well as a couple new things to the Parts and Advertising Section, including this...

Retro Sno*Jet T-Shirts For Sale!
Shirts are $15 each plus shipping. They come in sizes Medium, Large, and Extra Large.
If interested, contact Ken at jrkards@yahoo.com or call him at 218-731-2296.

Update January 2011: Things might look a bit different here, I've done some major renovating. Don't worry, I didn't get rid of anything, I've just re-organized it a bit. Click on any of the items above, and you'll see everything broken down into categories. I've also added some pretty incredible new material. First off, let me introduce you to the Thunder Jet II... A prototype race sled that was to follow the 1973 Thunder Jet. Click here to see all the new stuff.
Update December 2010: A few more additions to the Viewers Sleds section, including this beautiful 1966 Sno*Jet below.
Update October 2010: I keep adding more to the Viewers Sleds section, including this one below.
Have you ever wondered what a modern day Sno*Jet might look like... Click here to see more pictures of this incredible sled! A freshly restored 1970 GT3. Click here to see more pictures!

Update September 2010: I've had a busy summer. My 650 Thunder Jet is pretty much done, expect some updated photos very soon.
I've also been working on my GT some more, but it still has quite a bit of work to be done.

I've added a few more to the Viewers Sleds section, including this one below.

Here is a 1974 Thunder Jet 340. It's like new, completely rebuilt with the 340 MOD cylinders. The sled belongs to Paul Pelletier (Edmundston New Brunswick), but is actually For Sale!
If you're interested in the sled, you can call Paul at 506-353-0418.

Update May 2010: I've added a few things to the Tips section and the Viewers Sleds section.
I've also made some progress on my 650 Thunder Jet. Take a look at the photo below. I've just got some minor things to do and it'll be ready to race next winter!

I'm also considering starting a registry for the 1971 Thunder Jets.
It would be great to know how many are out there still. I'm looking for ideas and feedback.
If it works out, I'd consider doing the same for the other years.

Update March 2010: I've added some new stuff to the Viewers Sleds section, including this one below.

Update January 2010: Here's another little treat. Take a look at the Sno*Jet Parts Warehouse back in the day...

Update November 11th 2009: I've got a real treat for you all. Take a look in the Sno*Jet Research, Development and Prototypes Section

Update November 10th 2009: Here are a few of the sleds that were in the 2009 show in Regina. Doug Ruf did an incredible job on these ones.

Update November 1st 2009: I've been fixing up the site a little at a time. I've also added new stuff in the Tips section, as well as some new Vintage Racing Pictures.

Update October 2009: My 650 is running and almost ready for the snow. More updates coming soon. 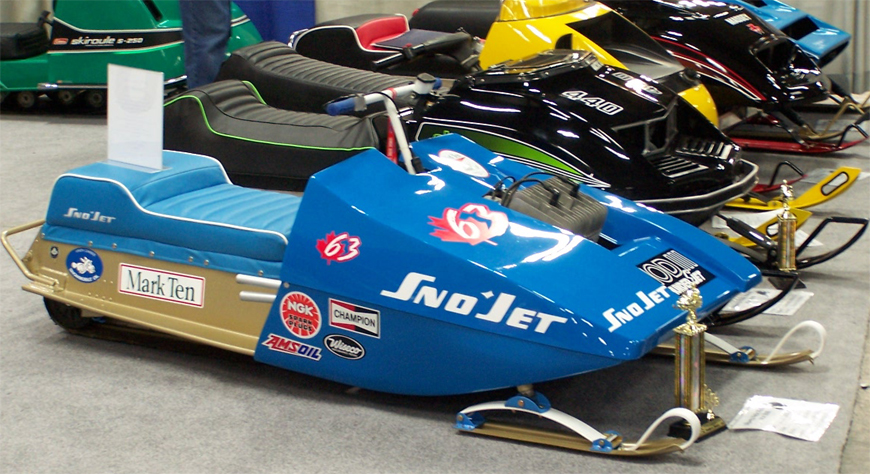 The spindles and steering are all billet aluminum and a chrome molly steering shaft.

The sled weighs 268 lbs. More work is currently happening on the sled.