2012 Update: It was an interesting year. I had my work cut-out for me. I ended up going with a Wahl 102" cleated track. I ran into issues because the original track was 103". I wasn't able to get the correct Wahl drivers, so I had them take the 102" rubber, and use 36 cleats. That way the pitch was very close to the original pitch, and I was able to keep the correct Thunder Jet drivers. With everything in, the track actually fit too tight! I ended up having to move the suspension ahead about an inch, and that fixed it right up!

It was an odd winter too, the first set of races (Moose Jaw Vintage Drags) ended up getting cancelled due to the lack of snow. The Earl Grey Vintage Drags were still scheduled, but it was going to be iffy. I managed to get the sled together about a week before the races. Unfortunately once it was together, I had no snow to test on. It definitely wasn't ideal considering the track, suspension being adjusted, I also went to the correct primary spring, and a belt that fit a bit better.

Anyways, I didn't even get to try out the sled till the morning of the races. You'll see the picture below... It was a very close one! The sled almost flipped over on me! Luckily I got her to come down, and at least it went straight. Still, very scary. I'm lucky I didn't break anything, and lucky someone snapped a picture (thanks Andrew)!

My first race, I was very scared, I didn't hammer the throttle, but luckily I was sitting far enough ahead (practically sitting on the handlebars) that I didn't get any lift, and I was good for the day. Now, for the rest of my day and the races, I still had a ton of issues. I should have had 7 races total, and I ended up missing 3 of them. A list of my issues: outer clutch hub got caught up and stuck, no idea how, but it only happened once. Loose wire on either the tether or kill switch. I shut the sled off waiting for the next race, and it wouldn't start again. It was way too hot out, my sled would heat up, the idle would go up automatically, and the engagement would lower. Also, by the end, the one side was running too lean, because the idle screw came out (same thing happened last year).

It was a very eventful day, and I learned that my sled doesn't like heat one bit. The new track worked great though! So, out of the 4 races I ended up running, first race (open liquid mod), took third, I was a bit gun shy after the test run. Second race, well, ended up being B-side open liquid mod, and I was last out of the whole (against an IFS liquid mod skidoo, and my buddies 73 650 Thunder jet). So, I'm last out of the hole, and I smoked them both, flew by the 650 like he was standing still, it was awesome, that run made my day! For my third race, it was the B-side open air cooled mod (cause I missed the first race), and it was a mod arctic cat, and I smoked them too! For the 4th race, well, it was the open liquid b-side finals, against my buddies 650 again, so I had to be prepared... I was watching the lights, and all of a sudden he jumped the lights, and my reaction was to also go, so I jumped the lights, and apparently the third guy jumped the lights too! So 3 out of 4 of us jumped the lights, and they re-ran the race. But at that point, my engine was way too hot and quit, thank god I didn't do any damage!

It was a blast, and I'm looking forward to next winter. Hopefully I'll get in some more testing and be running a bit more consistent. 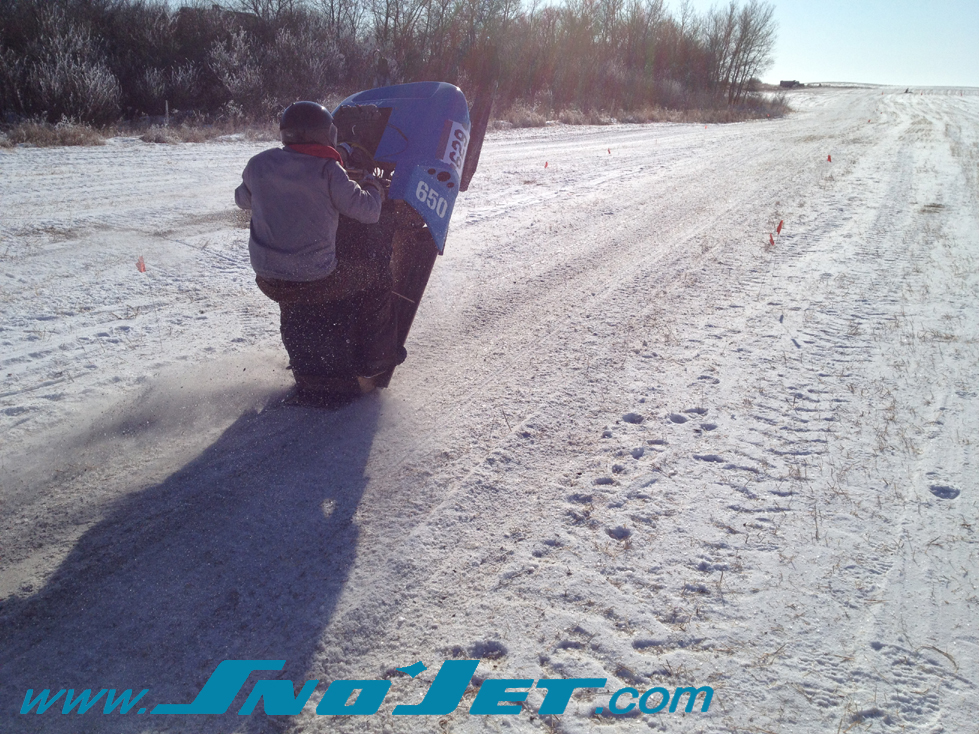 This project has spanned about 7 years or so now, and while I'm not 100% done, I have raced the sled and its pretty much complete! Alright, so its a 72 650 Tjet. Ok, so it's not really a 1972. Originally it was a 72 650, but those tunnels weren't built very strong. I'm guessing the original tunnel was trashed, so all the 72 650 parts were then mounted on a 74 tunnel. There are also some aftermarket parts. ARBE skis, handle bars, suspension, aluminum spindles and I had to add a Wahl throttle block.

I've since found a proper 72 gas tank, and will hopefully have the seat re-done very soon. For the future, I need a new track, want to go to a digital tach, give it a nicer paint job and hopefully just keep tuning the sled for racing. 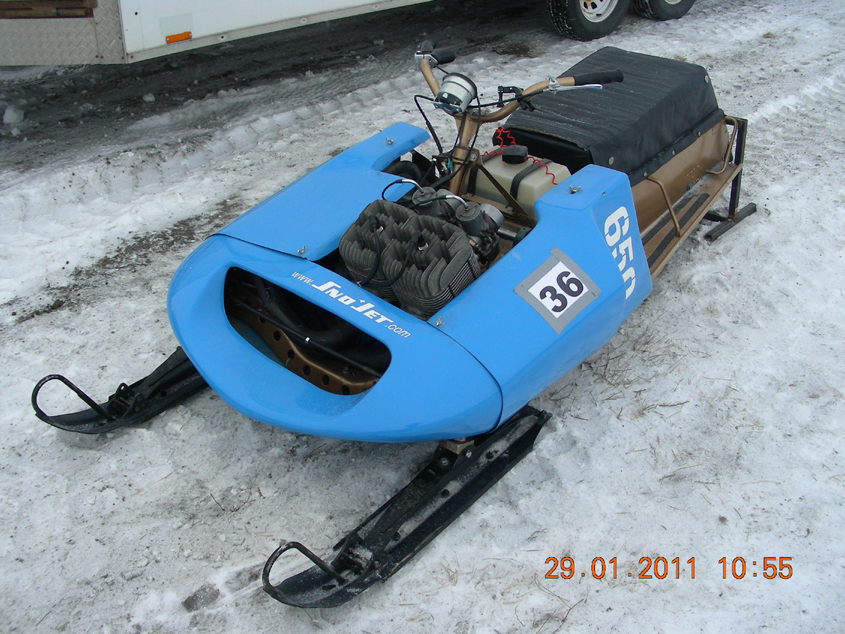 Here are a couple shots of the sled racing at the 2011 Moose Jaw Vintage Drags. 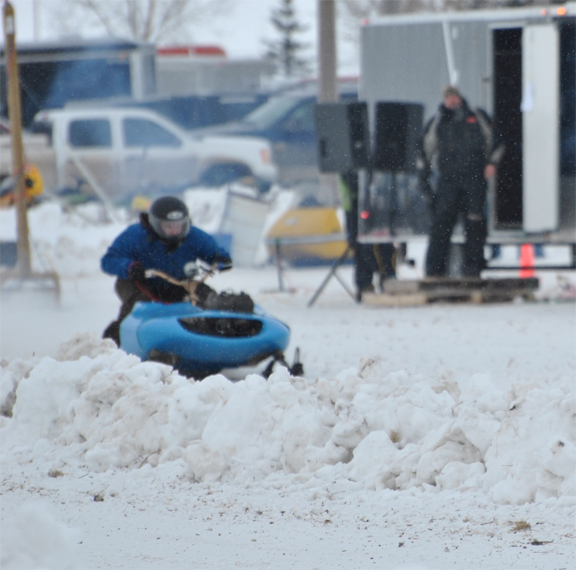 And a shot coming off the line at the 2011 Earl Grey Vintage Drags.

Here are a couple videos of the first day with my sled on the snow. Prior to that, it was only run on a stand in my garage. It was incredibly exciting that first time I hit the throttle. The sled actually almost threw me off, I really wasn't expecting it to be that strong. It was a huge adrenaline rush, and it still scares me...

Here's a HD video from the races at Earl Grey 2011. I snoozed on the lights a bit, and the guy on the Moto-Ski barely beat me, it was really close!

This was taken back around 2006. I had it together for shows. What you can't tell is that I still didn't have a proper jackshaft, or the secondary, no throttle lever either. Still needed a proper gas tank, new track, gears, and probably a whole whack of other parts. Still, it was good enough to show! 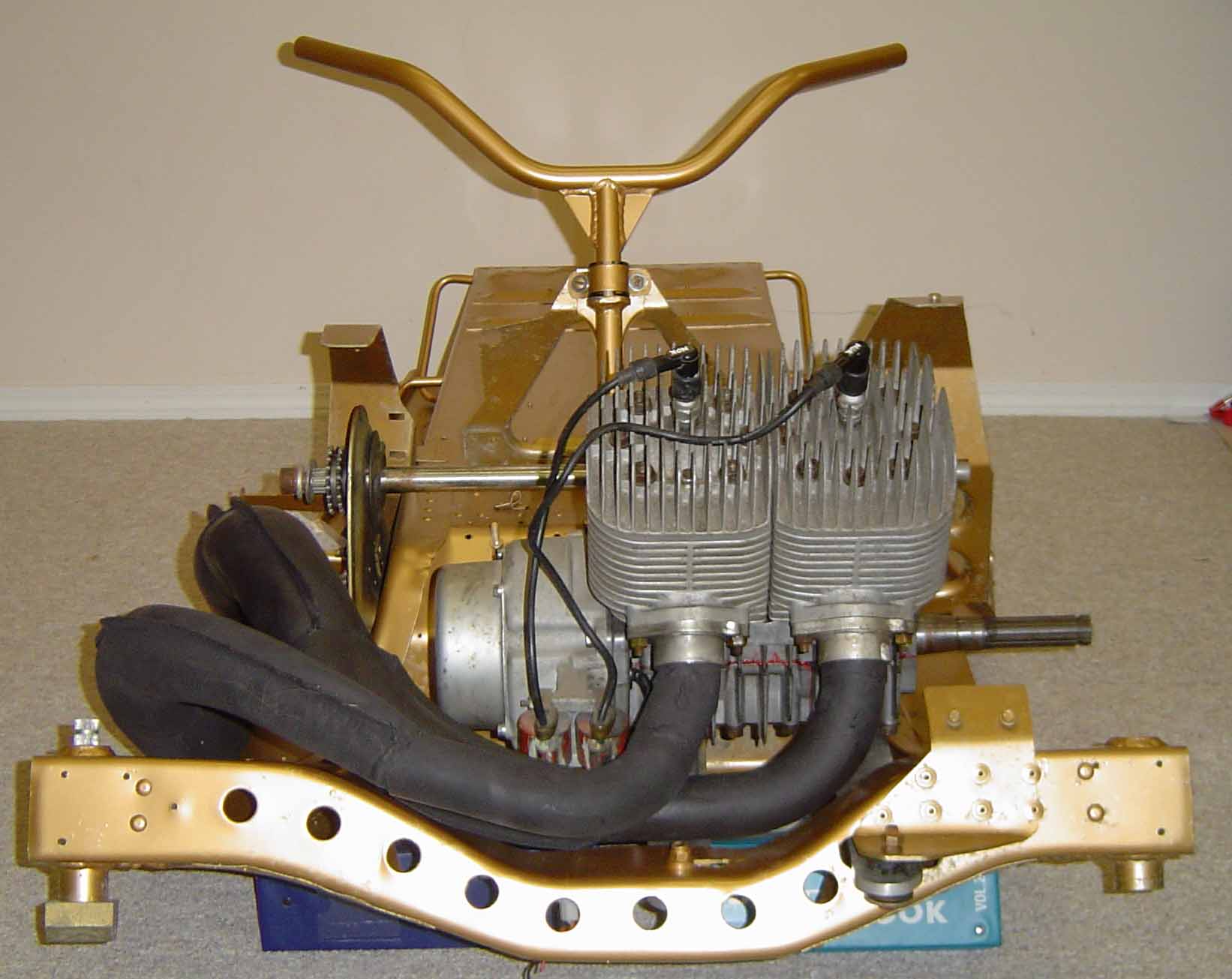 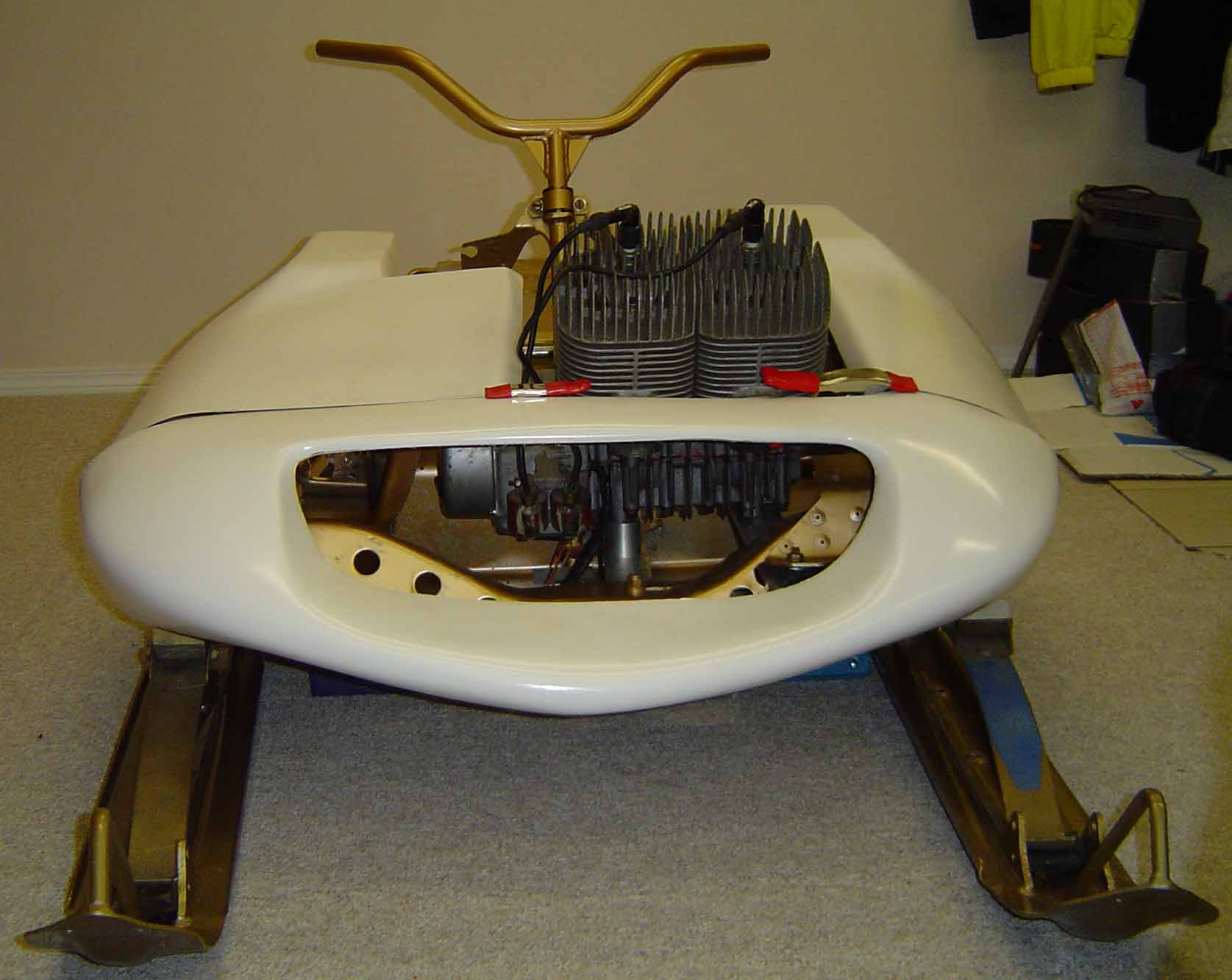 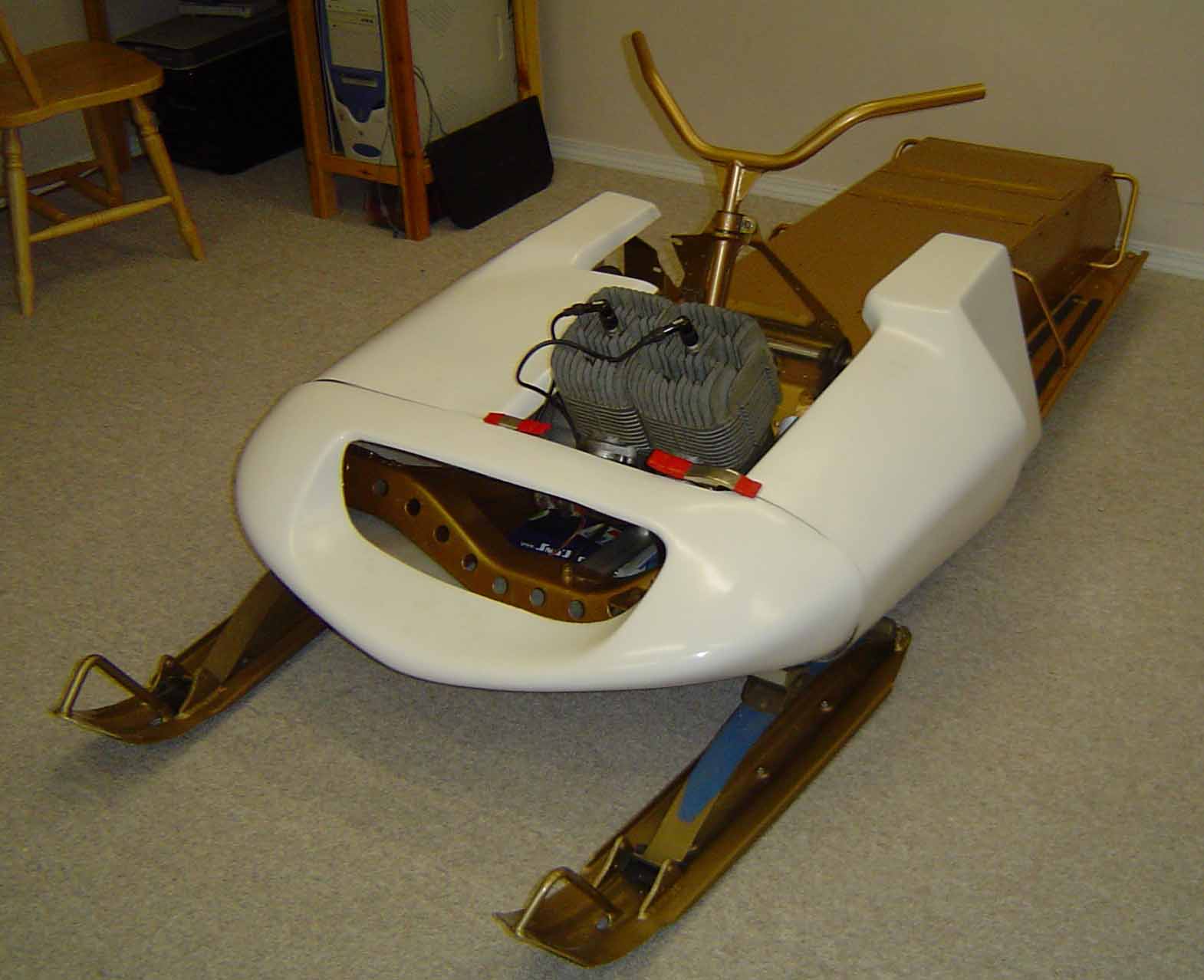 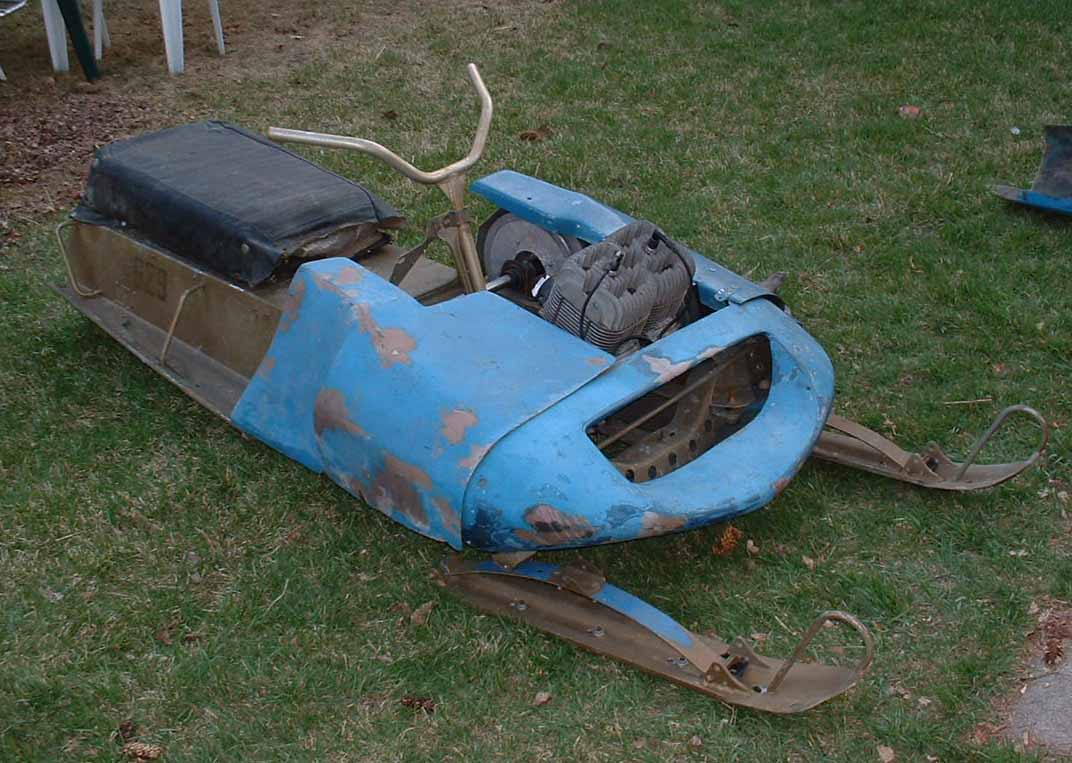 All the pieces sort of mocked together. 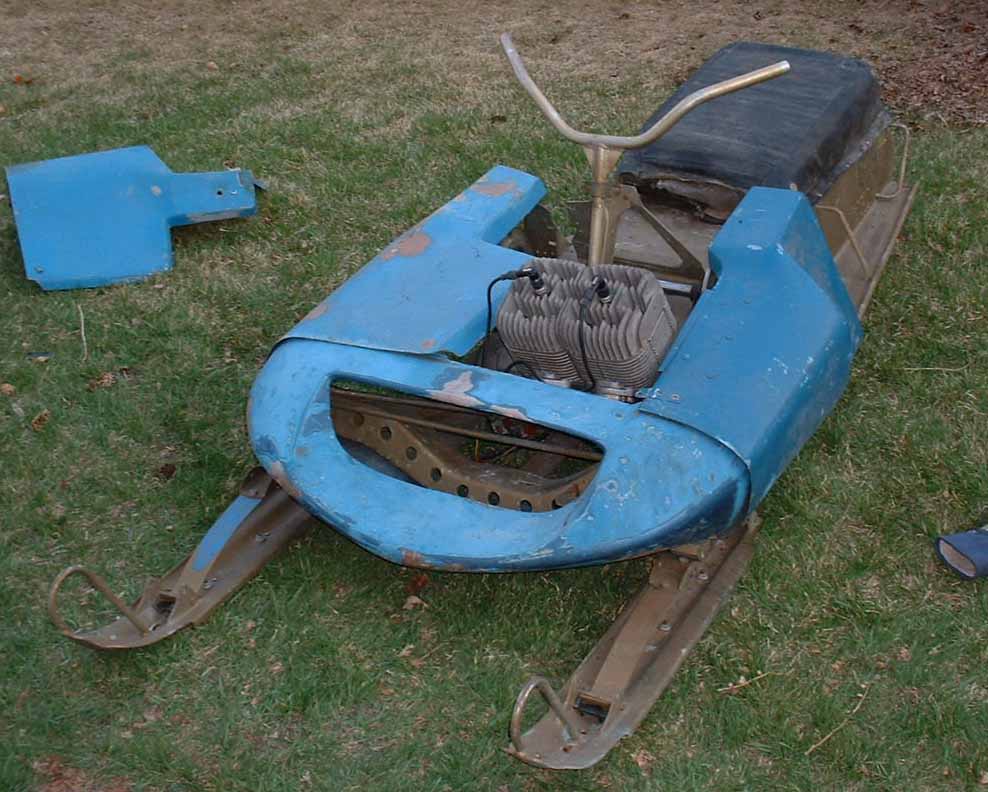 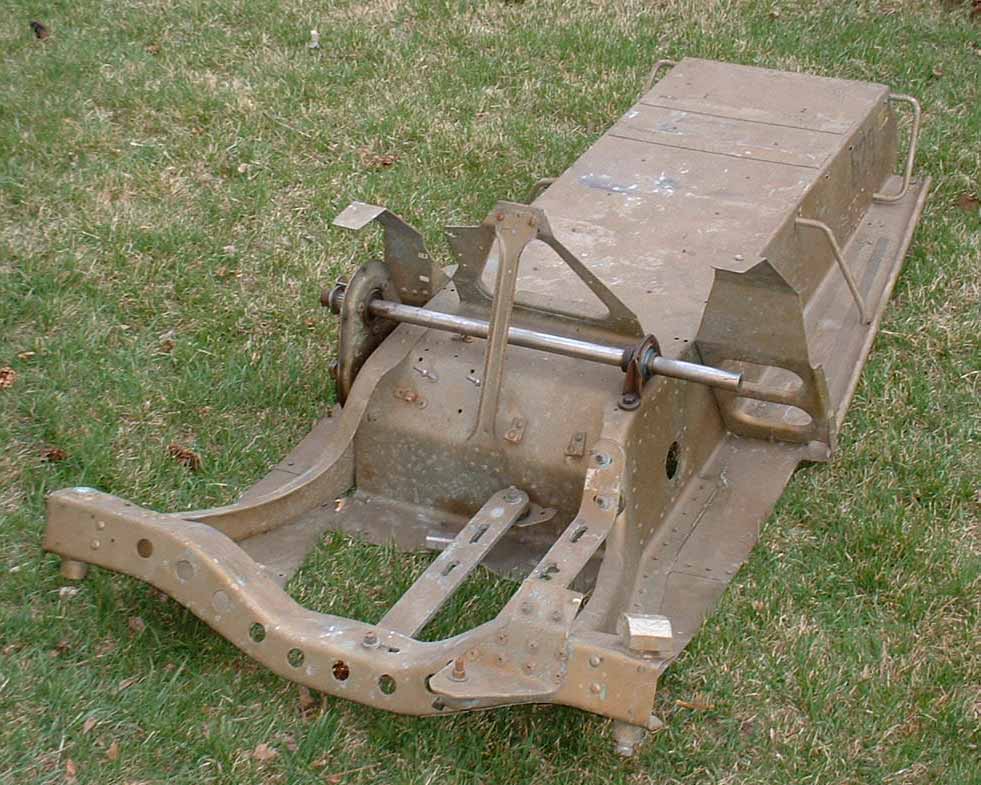 Here are the photos I first received of the sled. I was really taking a chance buying this, I mean just look at it! I really didn't have any info on the sled either. 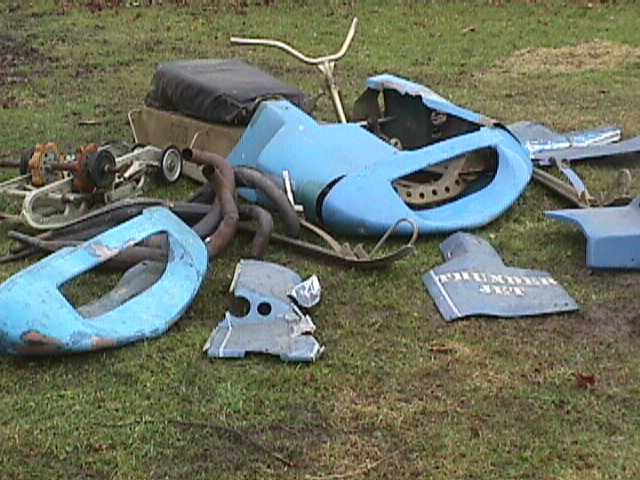 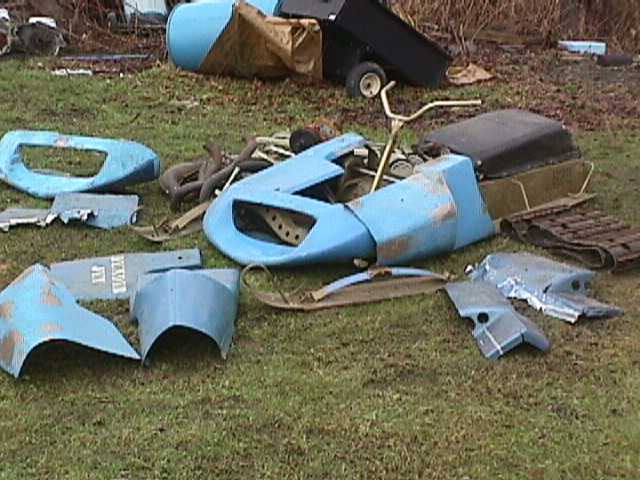 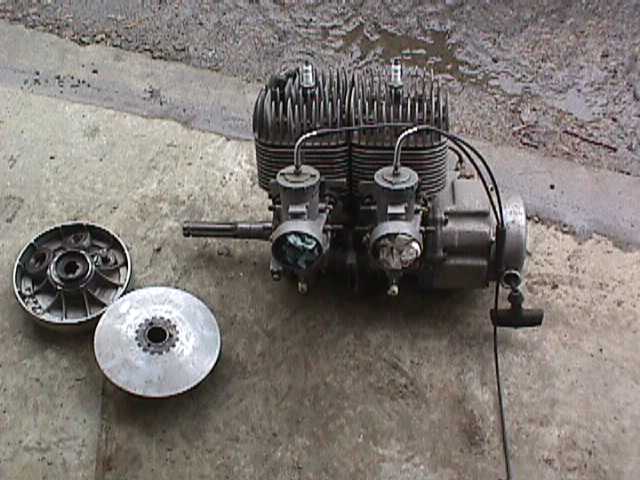