How to ID your Sno*Jet


First of all, you'll want to know what year your sled is. Look at the ID Tag usually located on the right side of the sled. Sno*Jets were usually made right before the season, so if your sled says MFG 73, that means it is a 74 model. If it says MFG 75, it is a 76 model. It was like that throughout the 70's. The only thing is that some models were made mid-season. 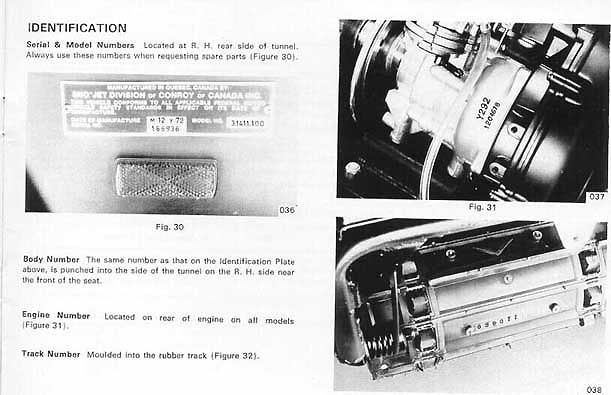 ID your Sno*Jet with the model number located on the ID tag.


* The pre-1970 Sno*Jets are abit harder to tell which one is which exactly. The 67, 68, and 69 models are very similar, and a lot of the parts were carried over year after year.

* The difference between a Y and S, the Y was a regular yamaha F/C motor, where the S was the sport model. The S had more HP, i believe from the ports in the cylinders, as well as different rings and pistons. If both motors are reed valve motors, in 74 it was used in the SST and the Sabre Jet, and they both had keihin carbs, where in 75 they also used keihin carbs, 76 and 77 were both mikuni carbs, that was the main difference. Now one thing you should look for, and it depends on what you'll be using the motor for, but in 74 even though they are both reed valve motors, the 74 versions had a splined shaft, which means that only a yamaha clutch will work on it. 75 and up, they had a different shaft, and pretty much used the cat hex clutches. The nice thing about that one is you can easily mount a comet clutch on it.

Now to ID the sleds, Here is an updated chart, but I'll give you a quick run through, so for example,

Also with that last number on the F/A's I believe between the production models there were a few other differences, they either used the comet clutch, or a cat hex clutch, and they all used dual carbs, but some were 32's some were 36's.

* If none of that stuff helped, your best bet is to just cross reference it with the sleds in the Models Section