(All images are in Thumbnail format, so please click on them for the full screen version)

Shortly after Conroy Company purchased Sno*Jet snowmobiles, an engineer named Duane  Aho was given a special job. This man was responsible for the conception, design, and development of the new racing snowmobile called the Thunder Jet. 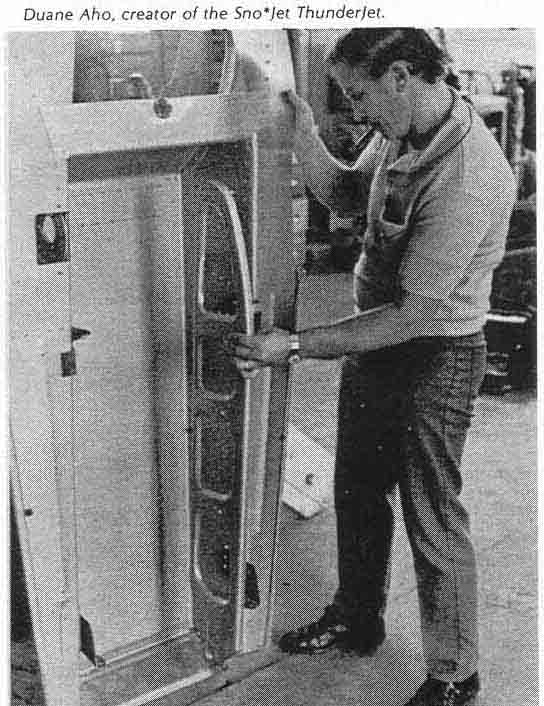 The first units were completed prior to the 70-71 season. The aluminum chassis worked out great. One hundred were produced in 71, and they all came with the Yamaha 440 free air type "R" engines.  It had an aircraft aluminum chassis, a cleated Arctic Cat track and Sno*Jet clutching.  They tried to adapt these changes to the G.T. but encountered many problems and gave up. The Thunder Jets weren't competitive enough to keep up with the other sleds that were burning alcohol.  It was too heavy.  It was unstable.  So they brought another young fellow who helped develop the machines who was a brilliant innovator, great racer, inventor and mechanist. His name was Jim Adema.  It didn’t handle.  The new ThunderJet prototype was quite a bit different.

In 72 the team made some changes to the sled, you were able to quickly change the ski to  ski stance, the ski to track stance, the length and width of the track, four different seat variations, four different variations of handlebars and so on. It was then given to Jim to test out and they realized that is should be lower, wider and more distance between the ski and track. The horsepower could also be overcome by reducing weight. This design was pretty much kept for all the other years. It was available with 4 different engines, 295 single, 340 twin, 440 twin, and 650 twin. Jim also had some sleds of his own,  he modified for racing.  He turned a 72 292cc F/A ThunderJet into a liquid cooled MOD sled.

At the races, the Thunder Jet was called the Thunder Chicken, and the sled that was run over by a truck and so one, but after they saw what it could do they admired it and wondered how it could do that. Probably one of the most famous victories was in Peterborough Ontario, in a five lap race, Jim lapped everyone once. The Thunder Jets saw many victories over the years all over the country.

The 1972 ThunderJet took over the racing circuit. There were only one hundred available for each of the 4 motor options, so they are extremely rare, and are still even today very competitive. The sled had one objective, to make a more dependable and predictable consumer machine. The sled featured an aircraft aluminum tunnel, and was very low and wide. It was testing grounds for the stock machines, trying out the new technologies like disc brakes and lightweight aluminum. The motor was more offset than the competitors and worked out quite well in oval racing. Now Sno*Jet never really had a factory racing team, instead they just sold off the thunderjets and actually paid all the entrance fees for every race entered. That turned into the Sno*Jet Million Dollar Racing Incentive Program. Where with every race entered, if you placed, Sno*Jet would turn around and pay out the racer. So that really helped and it gavel Thunderjet owners another reason to race. The sled did great and alot of people turned to the thunderjets in 73 where it basically beat out every other manufacturer, and no other sled company has been able to do that since... 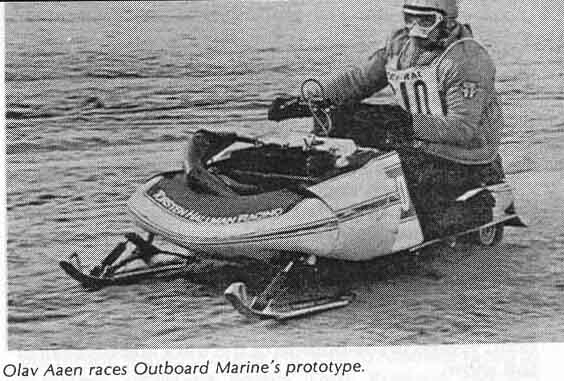 The ThunderJet chassis worked so well,  most companies used it to test their prototype racing motors.

Sno*Jet ran into troubles for the 73/74 season.  The USSA were going to start a professional racing for 74/75.  To have a Pro-Mod circuit, there would have to be some sort of a stock production limit.  The ThunderJet could not make it.  Sno*Jet was not a giant among companies, but it was steadily gaining ground.  One of the reasons for its position was the success of the ThunderJet modified racers.  Now the ThunderJet program had to be scrapped.  The old machines could still be raced,  but no new ones could be built. 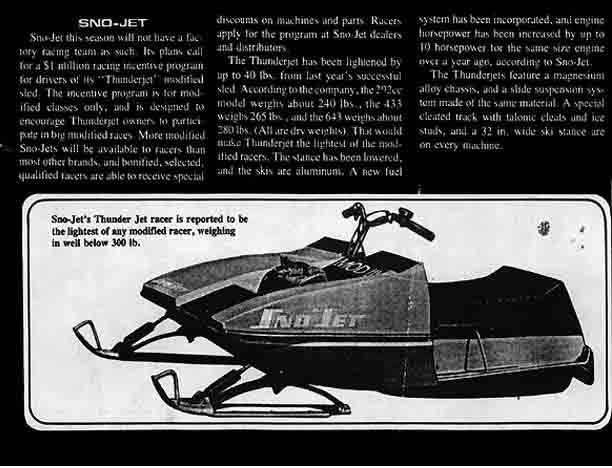 Keith Orme,  president of Conroy, Inc. desperately wanted to keep Sno*Jets name in front of North American racing audiences, however.  He has a special stock racing machine ready for production, a new ThunderJet F/A high-performance model, but building 100 or more of the units was too big a risk.  Orme made a final plea, and was turned down.  So on June 3, 1973, Sno*Jet prepared a law suit.

Sno*Jet did not meet the USSA requirements.  It would only race in associations where it was qualified… and where it would prove to be highly competitive against the new Mercury Sno-Twisters.  The last year for the Thunder Jet was in 75 it was a 440 free air engine, mikuni carburators, and an arctic cat drive clutch. The company was sold and that was the end of one of best racing sleds ever, The THUNDER JET!

The ThunderJets lived on, Kawasaki basically took the 1975 Thunderjet,  painted it Kawasaki colors and put in the Kawasaki motor and kept racing.  Today the ThunderJets are starting to come,  they are getting harder to find,  and are even being updated for serious racing purposes.