The sleds below belong to :
Bernie Blain


Bernie's dad worked at a Snojet dealership in the 70's. So they had one when he was growing up. After Bernie had kids, they had a couple sleds, then he gave them to their son once the grandkids were old enough to ride. Then, about 3 years ago he found one like he had when he was growing up, saw this website and this is what happened over the last 3 years! Bernie just got the Thunderjet, thought it would complete his collection... 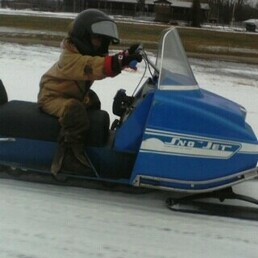 This is Bernie's 7 year old grandaughter. She was riding the track with her dad and he took this picture as she passed him. They attended the Marion Vintage Snowmobile festival and Bernie took "Best of Show" for his SnoJet display.