The Phantom Jet was the 'brain child' of Bob Mackin (Senior Mechanical Designer). The original Thunder Jet had given birth to the idea of placing the engine weight down between the pork chops, vs sitting high on the tunnel... and the rest of the world confirmed this arrangement's validity by following suit... this layout became the 'gold standard'. Bob was madly in love with the concept of a 'monocoque chassis' (heavy frame members swapped for a lighter sheet metal shell). He petitioned for this tirelessly, until Duane Aho and upper management conceded to prove this out with prototypes. The first prototypes were actually built as the Thunder Jet II. The idea was to set them as race sled, and then possibly turning it into a production sled. To learn about the Thunder Jet II development, click here. I (Peter) was also excited by this leap in design.

(NOTE: Since there were over one hundred companies competing for market share, during the years of 'snowmobile mania', there were some amazing leaps in technology and design. As I had said earlier, when all that separates a Ski-Doo from a Ski-Daddler was the paint job... you had to reach waaaaay out to hopefully 'leap frog' the rest of the pack! Since a new concept may take 2 to 3 years from being 'a sketch on a napkin' to a production model... you wanted to be sure your concept was still fresh when it hit the showroom floor, and not just keeping up with the competition! If you compared the evolution of the snowmobile to that of the automobile [maybe 1970 to 1976? sleds]; within less than a decade snowmobiles went from being crude sleds to what they are today! The Thunder Jet advanced the low CG chassis layout/ Yamaha created the present-day 'A-arm+shock' front suspension/ drive belt technology made amazing improvements/ bogie rear suspensions went to sliders/ tracks went from multi-part to one piece molded/ stying went from looking like upside down bath tubs to Ferraris/ etc! The auto industry has taken 80 years+ to make the same leaps. Sleds went from being Model T's to Camaros in less than 10 years!).

I (Peter) worked up the full-scale mecanical layouts and detail drawings for the Phantom Jet from Bob Mackin's early sketches and layouts. With his guidance, as it developed. The engine went as low as it could go, and all chassis pieces ahead of the tunnel became sheet metal! When Harland Lipker assembled the first proto, it looked 'low and snarky', with that bullet-shaped side view and no cowl. We wanted to get in as much testing as possible, long past the winter snows. So we used the higher mountain passes, in late Spring and early Fall to find snow (some of these passes get closed from November to May, as any snow makes them impassible). What a blast having a twisty mountain road all to yourself, to go flat out on! In the summer, we found some grassy fields. Since the slider suspensions required snow for lubrication between the Delrin slides and the track, we hooked up some water bottles filled with dilluted dishwashing detergent and ran tubes to the track, with gravity feed. The slides still fried, but took alot longer than if they were dry.

I was asked to work up some styling proposals for a FRP cowl (can be seen below). I thought this was my big chance to go nuts, and sink my teeth into a design that might show up on the showroom floor someday. Since this was Bob's baby, and he wanted to show off as much of the monocoque chassis as possible, I was somewhat restricted to developing a minimal cowl to shroud the engine and leave the outboard chassis revealed. I sketched up a ton of thumbnail sketches for the styling, and one was selected. So I whipped up a huge block of 2-part foam and started in with the 'cheese grater' and sandpaper. Then I skinned it in a thin layer of Bondo, and shipped it to Thetford Mines to use as a master for a female mold and fibreglass male. This design was used on the early protos, but the boys upstairs wanted a full cowl that covered the frame, as it got closer to production.

By now, Bill Wayland was on board as the resident Industrial Designer. So he did the styling on the Phantom Jet that you are acquainted with. His proposal was quite slippery looking, and quite a departure from snowmobile styling at the time. Also, his design was revolutionary in that it was a 3-piece affair (the side panels swung down for access). By this time, I had been promoted to being Bill's Assistant Designer, and had my fingers in nearly every aspect of the sled's development. I was in heaven! Bill recently was responsible for the Chevy Avalanche (the Swiss Army Knife of trucks). I'm not sure if the original Avalanche shape came out of his pencil, but he was the team leader on the project.

Another note regarding the design: Bob Mackin wanted as much of the chassis showing as possible. Since the bullet-shaped chassis was, even from across the street, quite a departure from anything else on the planet. It made sense to show it off, instead of hide it with FRP. This styling concept was early enough that the chassis had not been divided into what it might be as a track racer vs a production model. Once it had been considered as a possible candidate as a production sled, Bill Wayland's Phantom Jet production styling covered the chassis with FRP. But the Phantom's styling was advanced enough for it's day, that revolutionary styling hiding a revolutionary chassis was seen as more appropriate. Especially, if it kept curious fingers out of spinning clutches and torque convertors!

What lead to the 'death' of the Phantom Jet was that the chassis kept developing fractures under hard use! It performed fine, and was lighter than a standard sled. Perhaps it could have been saved, with some doublers here, some thicker sheet metal there, and some more development time. If the sled were being designed as a race sled, it would have been kept very light. They figured guys out racing would be willing to weld up certain areas after a weekend of racing if the sled performed well. For the sled to work as a consumer model, it would have needed to be a bit heavier duty to hold up to heavy use on the trails and not need any repairs. The sled was basically put on moth balls with the possibility of coming back to it down the road. It was at this point that Kawi entered the picture, and the economic issues at the time. So who knows what decisions were made, and exactly why? It was so close to going into production that I can remember cutting out logos and decals from scratch, to put on the FRP cowling.

There are two known Phantom Jets in private collections. The prototype type only has a spot for serial and model numbers. Looking at one of the serial numbers out of the two sleds, we can aproximate the build date to be around 12/73 or 1/74. It's about 41 digits prior to the earliest "Presidential SST" serial number we've been able to track down. We do not know if the Phantom Jets with hoods and cowls were built before or after the "original" two SST prototypes. This certainly confirms that they were built after the two original SST protos and about 1 year exactly prior to the 76 SST prototype.

What Peter and Harlen have told me (Kemper) already is that, when SJ was done with a proto, they were strictly destroyed, because there would be too many liability issues. Even though thru their life, certain employees could take them home and report on them, they were never to be kept, or sold to employees either. Sometimes certain parts were kept for use on another sled. Obviously, this policy was not always adhered to especially in the end. One possibility is that due to all the turmoil, and shipping of everything from east to the west, things fell thru the cracks with the top brass not watching or caring as much at that point. Then if some still existed and were taken by Kawasaki, they may have cared even less, what happened to them after that. 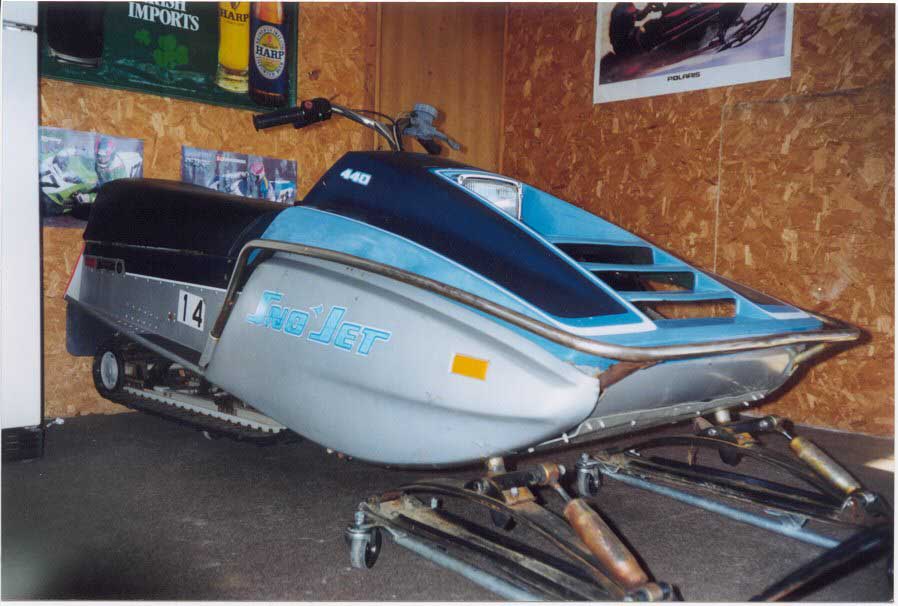 One of the Phantom Jet sketches done by Peter Morris. This was actually the finalist for the design proposal! It was selected from a ton of my preliminary doodles that were reviewed.

A few under the hood shots so you can see all the technology that was put into the Phantom Jet.